In November/December 1978 Berlin & New Versions toured Ireland on the 17 date "Streets Ahead" Tour, this was the first Punk/New Wave tour of Ireland. Original members John Borrowman & Chris Greene left the band in mid 1978 to form The Atrix, before the "Streets" tour. The original drummer Pat Moylett became the bands manager when ex "School Kids" drummer Charlie Hallinan joined the band in August 1978. Charlie & his younger brother Hugh had the same drum tutor, (Johnny Wadham) as Larry Mullen. Garry Roberts from The Boomtown Rats produced and paid for Berlins first professional demo, which later got them the deal with Charisma Records in London. Berlin were the first of the new Irish bands to get a deal with an English Record Company (Charisma) at that time. They also played support for various bands British bands on their tours of Ireland including; The Jam, Graham Parker and the Rumour and The Clash.

Many thanks to Charlie & Brian for they help with this page. See the Demos and Recordings page for Berlin's recordings. 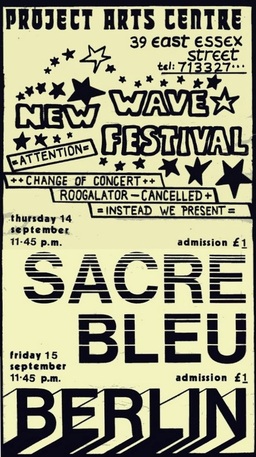 Poster opposite supplied by Charlie Hallinan

The Clash Ticket supplied by Charlie

Charlie Hallinan "The Clash", where Berlin tried to borrow Mick Jones Les Paul, when caught by the Clash road crew, their singer Brian Devon replied" I don’t know what the problem is, your always telling us in your songs "get what you need, doesn't matter how you get it" so we did, ... nearly. 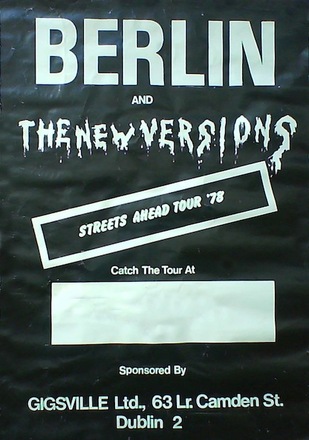 03/02/1979 McGonagles, Dublin. This was a Saturday after noon show for the under 18's, no alcohol was on sale in McGonagles.

Sometime during the month of February Berlin played McGonagle's with the Skank Mooks as support.

Charlie Hallinan Berlin's famous showdown with Graham Parker, when they ran 5 mins over their support slot, Berlin while still playing their last number the Parker Road Crew started unplugging Frankie Taylor's guitar stack, all hell broke loose on stage after the fight was broken up, Berlin were escorted off the stage, they decide to visit Parker's dressing room before they left, while Parker was playing his set on stage, Berlin loaded his entire drink rider from his dressing room into their van and then set off for his hotel, where Brain Devon did a convincing Graham Parker impersonation at hotel reception, got his room key and Berlin spent the next few hours ordering Champagne on Mr Parker's tab, gave the room a mild thrashing and left.

00/04/1979 NIHE Limerick Hot Press review by Rick Lime Berlin, it seems, are going to be big. They most certainly have got what it takes, i.e. a wonderfully modern name, spray paint jobs, fashionable consumer appeal, new wave look - in fact they look like a glossy colour supplement. Lastly, they possess catchy tunes - a mish mash of uninspired r 'n' b and watered down new wave. Their only drawback could possible be their age.
Having seen them at the Project I approached this gig with a certain amount of apprehension. There, they had paled in comparison with the likes of The Atix, U2 and The Virgin Prunes. Their lack of originality was certainly accentuated on that occasion. This their first gig in Limerick, offered a better chance to access them accurately.
The crowd, made up of pseudo punky wavers and pseudo hippies along with a sprinkling of local pop stars (hi humans) seemed to enjoy Berlin's brand of sweetened new wave confectionery.
Berlin delivered a short set of three minute songs ranging from the excellent "Tube Talk" to the horrendous "Heart Of A Saturday Night". After 30 minute 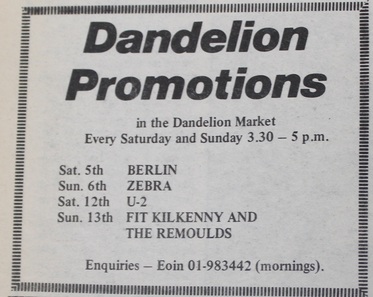 s one got the feeling that they were singing the same song over and over again. Even a prospective killer like "Over 21" is rendered sterile with dumb lyrics like "You can't rock n roll like me". They write songs about getting pissed, getting sick and gang bangs. A real "lads" band except they don't really look the part. They played two cover versions "The Last Time" and "All Or Nothing". Both were tiresome.
And yet Berlin undoubtedly have potential. "Tube Talk" will make a great single. In Maurice Czeniak (bass) and Charlie Hallinan (drums) they have a shit hot rhythm section. Vocalist Brian Freeze wants to be a star but he'll have to work on it. At the moment who needs another Bob Geldof. As it is he lacks the charm of a Geldof and is too old to be seen as "one of the boys". But he has the confidence to sidestep these issues.
Frankie Taylor's guitar playing is my main complaint. He sounds like a heavy metal dinosaur trying to escape bondage. His solos are mercifully short but nevertheless heavy headed. He'll never be a "guitar hero" (an awful term) because he dosen't know the right moves and more importantly Freeze wants the attention centred on himself.
I'm sure these problems will be ironed out and Berlin will make a lot of money..... and so the beat goes on.

22/11/1979 Ballyraine Hotel, Letterkenny with San Quentin. This concert was part of the "White Heat" New Wave festival, the other band playing the festival were The Blades, Tearjerkers & The Atrix, San Quentin were the support band for each concert.

20/01/1980 Pavilion, Dun Laoghaire, with Jaroc John McKenna Hot Press Dun Laoghaire’s rusty Pavilion echoes relics of bygone days and ways in its charming airiness and inebriate ornamentation. Warmly coloured, it’s beauty is scarred only by the fact of how much it is simply…. Useless. 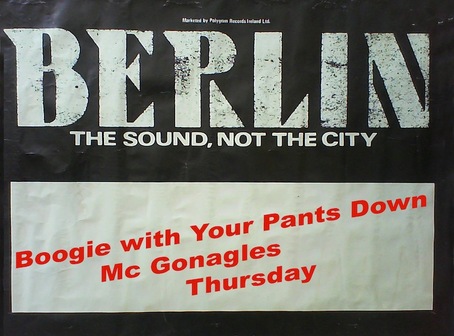 First up tonight are Dublin “rockers” Jaroc weaving a whirlpool of leaps, solos, noise, bombast, leaps and efficiency.
Satin trousers inevitably tight, are thrust forward and backs are arched for yet another guitar solo. The realms of John McLaughlin meeting Stanley Clarke and George Duke for a jam. Not one speak of wit, originality or true emotion surrender itself. Naught but legs and solos.
Berlin troop on, gaily clad, with Frankie freshly shaven drummer Charlie surrounded by tom-toms. Bassist Maurice still looks like Billy Bunter’s best friend playing truant, fearing a mortar clad master with every genuflection sideways. Brian Devon exudes all the self-confidence and command of Woody Allen; he paces the stage like a man in a waiting room, anxious for the first sprog to be born, simply unaware of any notions of style or composure.
Berlin work on bluff, bluster rock for people who find the intensity of Joy Division, The Outcasts and The Doors just too extreme. Berlin are a cosy fire, and there in lies the trouble. Great rock ‘n’ roll has always been made by people who were practically dangerous or at least a little unbalanced – Jim Morrison, Jerry Lee Lewis, Ian Curtis, the list goes on. Berlin are nice little boys who probably don’t believe in getting pissed and all did their homework. Berlin are too straight, Their songs are too straight possessing neither invention nor quirks, power nor subtlety, love nor sympathy. They are sad manifestations of insecurity trotted off in a fashion the boys would like to believe is rock ‘n’ roll. Definitely rock, very little roll.
As such Berlin could have a big future, their records could be added to the volumes of Skids, Ruts and Police albums the unthinking rock fan likes to play to his friends when they drop in. I wish them well and hope they prosper from the squalid game of rock ‘n’ roll. If someone has to lead the blind, it might as well be the blind. 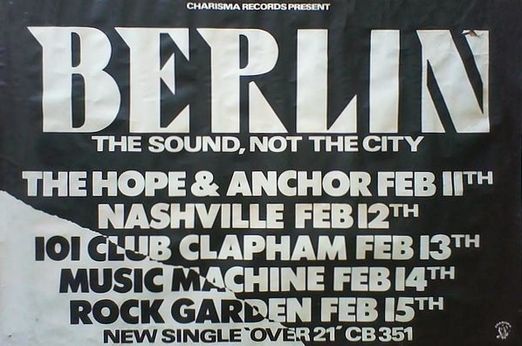 Charlie Hallinan Berlin went to London in 1979 to do a series of gigs set up by their new  record company Charisma Records in London's Wardour St. The Hope and Anchor was their first gig followed by.. The Fulham Grey Hound .. The Rock Garden .. The Music Machine .. and The 100 Club. U2 Were also gigging in London doing the same type of gigs, Larry summed it up "We'd reached a certain level in Ireland, so it was like going back to scratch, playing to nine or ten people who just couldn't be arsed. the sound in the clubs wasn't very good, we couldn't hear ourselves playing". Berlin later returned to London in March 1980 to do an Irish music festival called A Sense of Ireland, which brought to London Ireland's best and up and coming bands, and established artists like Rory Gallagher, Berlin played at the Acklam Hall Notting Hill, supported by U2 and the Virgin Prunes, on the 19th March 1980.
And so the beat goes on. 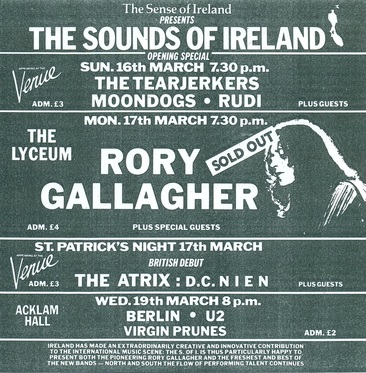 19/03/1980 Acklam Hall, London with Virgin Prunes & U2 "Sounds of Ireland Festival" Review by Peter Owens Hot Press Berlin need more bad press like Declan Lynch needs Berlin. But hopefully, they'll one day deign to consider that it might just possibly be themselves who are at fault, and that there isn't in fact a well organised conspiracy against them. Why did the hall empty 3 numbers into the set - and they weren't going to catch the last bus, they were just filling the bar outside?
Berlin were everything their "support" acts weren't; where the Prunes are shamelessly contrived, Berlin are still trying to pretend that they're not contrived at all. But their lacklustre, worn out and just plain uninteresting endless retreads of Route 66 only succeeded in losing much of the ground that had been won earlier in the evening. They're competent in a way, but so what? They don't stimulate, they depress.
Brian Devon is moving ever closer to his illustrious chum, but if he had twice Geldof's charisma, which is far from the case, what worked once in '77 will not work twice in '80. His increasingly desperate attempts to coax any sort of a reaction only more and more embarrassing, and they were reduced to coming back for the un-asked encore so quickly they almost played it before the last number. Their bitterness demeans them, their lack of dignity appals. They of course think they're right and I'm wrong; the difference is that I would love to BE wrong. I'd like to say something good about Berlin. But I can't.

07/04/1980 Midnight Club, Ballaghaderreen, with The Bogey Boys
The Bogey had to cancel their appearance as their lead guitarist was ill, they would play this venue a couple of weeks later instead.

Where Are They Now?
Demo's & Recordings

Your Help is needed!

If you can help with any information, demo tapes or memorabilia on this band please get in touch, using the above form.